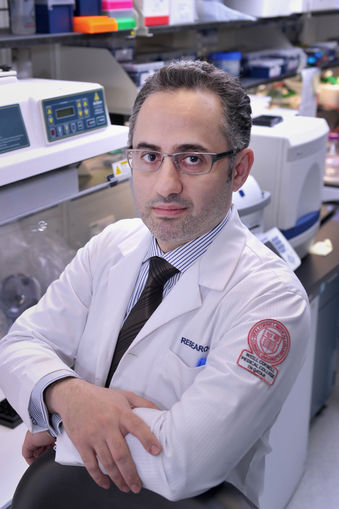 A researcher at Weill Cornell Medical College in Qatar (WCMC-Q) has contributed to a discovery that could one day rival statins as a means of regulating cholesterol.

The discovery of how a form of microRNA helps control cholesterol could have huge implications, improving the quality of life and preventing the premature deaths of tens of thousands of people each year.

Dr Hani Najafi, Assistant Professor of Cell and Development Biology at WCMC-Q, and his fellow researchers at Massachusetts General Hospital and Harvard Medical School have conducted the research published in the leading high impact Journal of Science Translational Medicine.

Dr Najafi said: “The work that has been done so far has had very significant results and although we’re not yet at the stage of announcing a new drug, I am hopeful that the treatment will one day be clinically important. High cholesterol levels are associated with heart disease, diabetes and atherosclerosis – some of the main causes of premature death – and it would be very satisfying for myself, my team and WCMC-Q to think that we have helped prevent some of those deaths.”

Dr Najafi said that the foundation of the research was established in 2010 when he found a novel mechanism that contributes to proper cholesterol/lipid levels in the human body. This led him to look at the microRNA miR33. MicroRNA helps regulate gene behavior and although scientists already knew about the existence and location of miR33 - which comes in forms a and b - they did not understand its function and purpose.

Working with mice, which only possess miR33a, Dr Najafi and his collaborators found that the miR acts with the gene it is located on, to promote cholesterol biosynthesis. All miRs are known to target certain genes and it was found that the main target of miR33a is a transmembrane protein called ABCA1. This regulates the levels of high-density lipoproteins (HDL) – commonly known as good cholesterol – by promoting biosynthesis; cells make cholesterol and ABCA1 gets rid of it in the form of HDL.

HDL is beneficial cholesterol so the more you have of it the better you can reverse the initial symptoms of metabolic syndrome. This has been associated with type 2 diabetes and heart disease and can ultimately lead to atherosclerosis and heart attack.

However, Dr Najafi and his fellow researchers found that if they inhibited miR33a then they could increase the amount of HDL in the body. HDL is important as it is implicated in the pathway called reverse cholesterol transport (RTC) whereby excess cholesterol is taken from the blood and transported to the liver.

Here it is processed and cleared from the body, so the more HDL the stronger the reverse cholesterol transport and the more cholesterol is removed. In mice, Dr Najafi found that the amount of HDL could be increased by between 20 and 30 percent if the microRNA was inhibited (Najafi-Shoushtari et al Science, 2010).1

However, mice only possess miR33a. Humans and other primates possess both miR33a and miR33b so the team needed a new concept that would target both forms for inhibition. They did this by utilizing an ‘antisense’ strand that forms a robust double strand with miR-33a and b. Usually miRs are single-stranded but when double-stranded they are inactive.

These specific antisense-miRs were then injected into a population of monkeys that had been kept on a high-fat diet with excess cholesterol. The monkeys were obese when the miR33 inhibitors were injected but after the procedure it was found that their HDL levels increased by 40 per cent compared to their counterparts who did not receive the inhibitor.2

The findings could have huge implications for the treatment of cholesterol-related problems, and also those who need to maintain low cholesterol levels due to previous illnesses and procedures.

Currently, statins are used to control cholesterol levels by blocking its production but these are not without side-effects; statins can cause headaches, nausea, abdominal pain and, in rare cases, liver failure and skeletal muscle damage. But so far miR33 is believed to be non-toxic as well as being easy to administer.