The Shifting Demography of Migrant Labor in Qatar Discussed at Georgetown 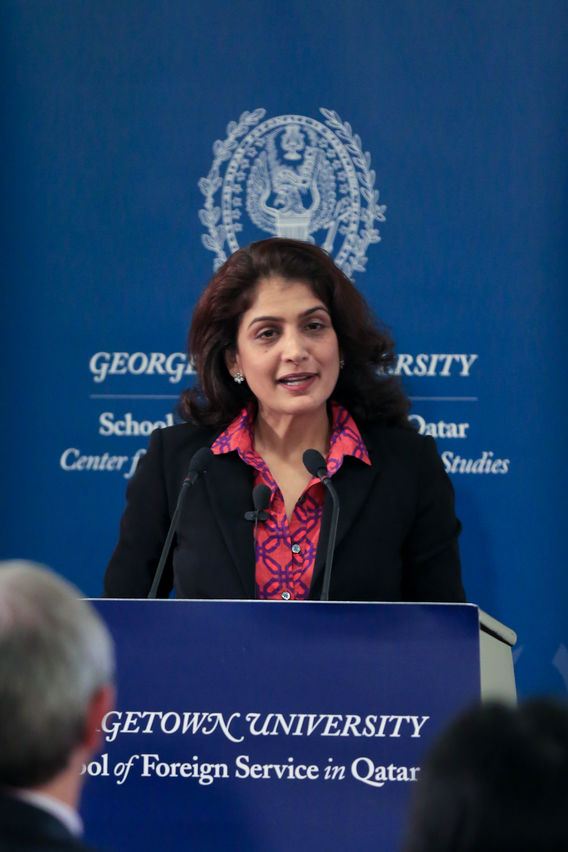 The Center for International and Regional Studies (CIRS) at Georgetown University – School of Foreign Service in Qatar (SFS-Qatar) hosted Zahra Babar, Associate Director for Research at CIRS, for a CIRS Monthly Dialogue ‎lecture titled ‘Working for the Neighbors: Arab Migrants in Qatar’ recently.

In her presentation, Babar ‎delved into the topic of Qatar’s recent population boom, with a focus on non-GCC Arabs in the workforce, and the economic factors that contributed to the shifting demographic balance of migrant workers.

“The migrant population in the Gulf in general, and in Qatar in particular, has ‎increased significantly over the past few decades,” said Babar in reference to statistics showing Qatar’s population tripling to two million since the 1990s. “And although we all are aware of this ‎large demographic presence of foreigners in Qatar, surprisingly enough, we actually do not know ‎very much about them: where they’re from, where they’re working, and how they’re integrated into the labor market.”

She explained how the issue of nationality guides her research because it is an integral component in understanding the issue of migrant labor, impacting salary structures, benefits and prospects. “Nationality has a strong correlation with how one is ‎integrated into Qatar’s labor market,” she explained. ‎

She traced the trajectory of non-GCC Arab migrant populations in Qatar, pointing out that while their numbers used to account for 70 percent of the population in the 1970s, this has decreased to less than 20 percent today. Babar cited recent figures obtained from the Qatari Ministry of Labor, which ‎placed non-GCC Arab expatriates in Qatar at 146,000, or 13 percent of the total workforce.

The explanation for this downward trend in Arab workers, Babar argues, is simple economics. For GCC states rushing to employ workers in the early days of the burgeoning energy industry, employing workers from neighboring Arab countries made sense, given the shared cultural and linguistic connections.

Over time, however, expanding numbers of non-working dependents meant Arab worker wages were not economically competitive, resulting in a shift to cheaper labor that could keep pace with the increasingly globalized and developed hydrocarbon industry.

In conclusion, Babar said “in Qatar, the state and society are extremely concerned about the ‎demographic imbalance and the increasing presence of foreigners outnumbering them, and so ‎really what they are looking for is to have their labor market needs met without any incremental ‎increase to the population.” ‎