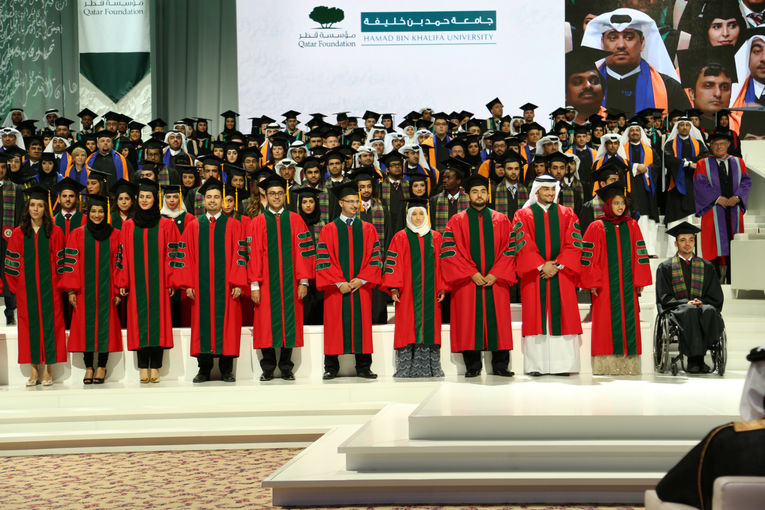 Almost 550 elated graduates are ready to embark on a new phase in their lives after celebrating their triumphant achievement at Convocation 2014, held in the presence of His Highness the Father Emir Sheikh Hamad bin Khalifa Al Thani and Her Highness Sheikha Moza bint Nasser, Chairperson of Qatar Foundation for Education, Science and Community.

Students were honored for their commitment to education during a ceremony that took place at the Qatar National Convention Centre.

The Class of 2014 signifies the highest number of graduates in Education City’s history, with 549 students from over 55 countries participating in this year’s convocation. The number of graduates this year is considerably higher compared with 2013 when 437 students were awarded degrees. The gender gap continues to be in favor of females this year, as 53 per cent of the graduates of the Class of 2014 are women, while 47 per cent men. A total of 292 women and 257 men made up the 2014 graduating class.

Commenting on this year’s convocation, Engineer Saad Al Muhannadi, President of Qatar Foundation, said: “Education and knowledge are the solid foundations upon which great societies are built and today, we are proud to watch as hundreds of graduates enter a new phase in their lives, on a journey to contribute to the sustainable development of the State of Qatar and rest of the world.” 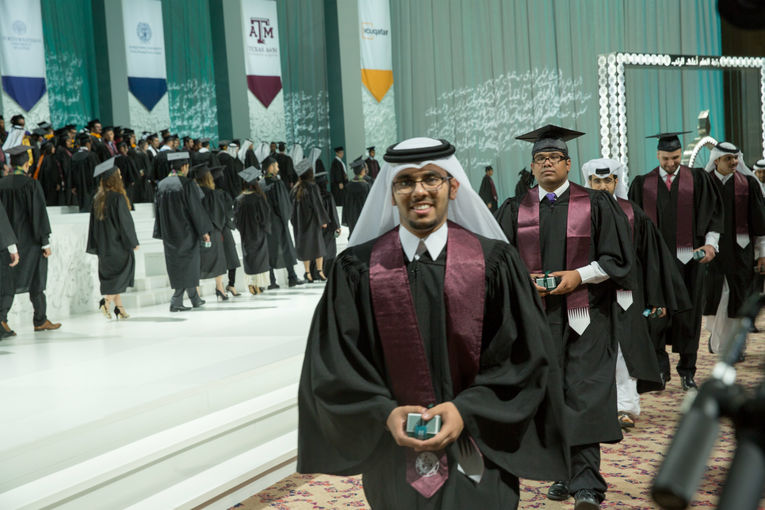 “Indeed, it is the first-class education offered by Hamad bin Khalifa University (HBKU) and its partner institutions that draws students from around the world to Qatar. This is a testament to the quality of education that we offer here at Education City, and is a clear demonstration of our successful strategy, which reaches far beyond our geographical borders,” he added.

In his address to graduates, His Excellency Sheikh Abdulla praised the students on their outstanding accomplishments and said: “Class of 2014, I congratulate you and your families on your accomplishments. Your experience at Education City has enriched you and equipped you to search for, and find, satisfaction in your lives and in your careers. Today you can enjoy the feeling of a job well done. Tomorrow you begin the next stage of your journey in which you will increasingly give back while, at the same time, continuing to learn. This is the spirit and the beating heart of Education City.”

And over the past decade, a total of 1,273 graduates have received degrees in various disciplines from universities based in Education City. This year saw the graduation of 81 students from HBKU, 34 doctors from Weill Cornell Medical College in Qatar and 116 engineers from Texas A & M University at Qatar, alongside 81 Masters of Business Administration students from HEC Paris in Qatar.

During her keynote address to the Class of 2014, Wendy Kopp, Founder and Chair of the Board of Teach For America and CEO and Co-Founder of Teach For All, said: “I am honored to have worked with Sheikha Hind bint Hamad who launched Teach For Qatar two months ago to mobilize young leaders to improve the educational outcomes of this country.”

“As you consider where to direct your invaluable energy in these pivotal years, I hope you will decide to pursue not only the instant innovations, but the slow and challenging work of building a new world where every child has access to an excellent education,” she added. “This is the long game. It will take time. It will require deep change. But it is the only way to realize our aspirations of a world that is economically prosperous, peaceful, just, healthy, and sustainable.”

A short film about the Class of 2014 was shown during the ceremony. In the film, students from various fields, including medicine, computer science, design, Islamic studies, engineering, journalism and international relations spoke fondly of their experiences and expressed a strong sense of belonging during their time at university.

HBKU also presented graduates from its colleges of the Qatar Faculty of Islamic Studies, and the Translation and Interpreting Institute with their degrees. Although each university holds its own graduation ceremony,

Convocation 2014 gathers all undergraduate and postgraduate students from universities across Education City for a night to remember together.