His Excellency Ali Sharif Al Emadi, Minister of Finance, and HE Jassim Saif Ahmed Al Sulaiti, Minister of Transport, were accompanied by HE Issa bin Mohammed Al Mohannadi, Chairman of Qatar Tourism Authority, as they met exhibitors who explained the various educational activities being showcased within the QF tent.

The ministers toured QF’s popular tent, impressed with the wide range of activities being promoted across Qatar Foundation’s core pillars of education, science and research, and community development.

The ministers expressed their interest in the showcase activities, congratulating Qatar Foundation for its sterling work in supporting the Qatar National Vision 2030 and went further to say they would like to visit QF’s Education City to see the Foundation’s various initiatives first hand.

Now in its ninth day, the celebrations at the Darb El-Saai grounds have attracted thousands of people of different ages to the many informative, fun and educational activities being organized by different centres and members affiliated to Qatar Foundation. 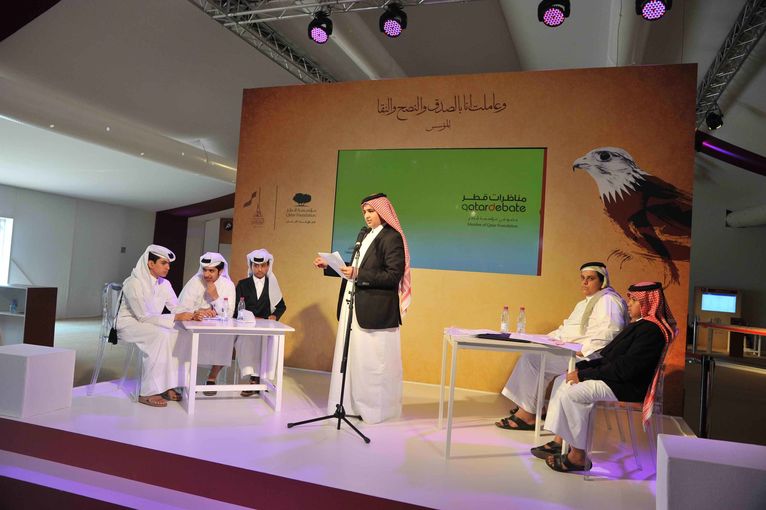 Activities include a special corner for QatarDebate, a QF member, encouraging young people to meet and master the art of dialogue; QF’s community broadcast station QF Radio offering young visitors the chance to be reporters for the day; exploring the world of horses, a tradition deeply rooted in Qatari heritage, through QF member Al Shaqab which is giving special riding and grooming lessons, as well as horse healthcare tips outside the QF tent; and plenty more.

Qatar Foundation’s tent will be open throughout the Qatar National Day celebrations which, this year, run for 13 days until 20 December.

Qatar National Day is celebrated every year, and is a national commemoration of Qatar's unification and independence.