Share
Northwestern University in Qatar (NU-Q) will welcome its largest class of undergraduate students to the university’s new building in August. 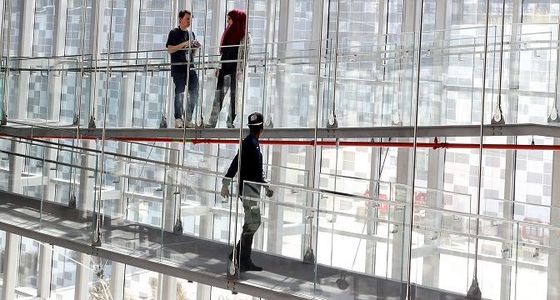 NU-Q’s 10th class will attend a week of orientation sessions that are designed to help prepare them for their undergraduate experience, as well as introduce them to Northwestern traditions that are a part of every student’s experience at Northwestern – in Doha and the home campus. From the University’s mascot to its fight song, along with the traditional ‘March Through the Arch,’ the orientation introduces NU-Q students to the Northwestern global community.

“The incoming Class of 2021, like all NU-Q classes,” said Everette E. Dennis, dean and CEO, “is very diverse with students coming from 25 different countries. In addition to their academic achievements, this year’s class includes a star female athlete from Qatar’s national track and field team, several local students who were at the top of their high school class, and international students who scored in the top five percentile of the SATs worldwide.”

The week-long orientation provides students with the opportunity to explore NU-Q’s new building, which includes a world-class multimedia newsroom with the infrastructure of a TV network and modern robotic infrastructure; three video production studios; two 150-person lecture halls, and a two-story research library. Students will have a first-hand experience in the studios and production facilities, spending time creating a video using the new editing suites.

The incoming class will learn more about the educational opportunities offered at NU-Q, which includes an emphasis on undergraduate research where students produce projects and papers, working closely with faculty, often with special funding. Many NU-Q students also present at major national and international meetings, as well as in activities on the home campus, including research grants, a research fair, and University-wide publications.

Northwestern established a school of journalism and communication in Doha in 2008, welcoming a class of less than 40 students. Today’s undergraduate program in Doha has approximately 300 students. The Class of 2021, which will have the opportunity to complete one of two majors - journalism and strategic communication, or media industries and technology, will also have the opportunity to learn more about the achievements of the NU-Q alumni in whose footsteps they follow.

In June, NU-Q awarded degrees to 47 graduates, who join 222 NU-Q alums, along with 230,000 Northwestern alumni around the world