The spotlight has shone on two students from Northwestern University in Qatar (NU-Q), a Qatar Foundation partner university, at the Ajyal Film Festival. 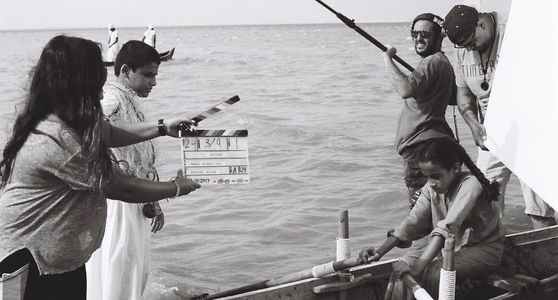 “NU-Q recognizes that these awards reflect on the quality of education our students receive, as well as the support they have from faculty, the administration, and student clubs,” said Everette E. Dennis, dean and CEO of NU-Q.

“Over the past 10 years, we have been proud to see our students and alumni continue to shine at festivals from Ajyal to Cannes with films and documentaries that include powerful messages on social justices and incorporate creative storytelling techniques.”

Al-Muftah’s film ‘Sh’hab’ (Shooting Star), funded by the Doha Film Institute, was inspired by a myth her grandmother used to tell her about stars falling into the sea at night and new stars coming forth each new day. She credits Professor Rana Kazkaz, Assistant Professor in Residence in NU-Q, with providing critical encouragement throughout the process.

“While I was working on this film, I was taking the class ‘Director’s Vision’ with Professor Kazkaz, who is also a director, and she gave me a lot of guidance and feedback on this film,” said Al-Muftah. “It was incredibly beneficial to go to class and learn about the filmmaking process while I was literally experiencing it as real-world application.”

Al-Dhubhani’s film ‘Just Another Memory’ also came from personal experience, as a Yemeni citizen who fled conflict in her home country in 2015. “This personal documentary is a piece of me that tells not only a part of my life but also highlights an important humanitarian crisis,” she said. “If it were not for NU-Q, I would not have been able to have the chance to follow my passion for media.”

Al-Dhubhani made the film as part of the DFI’s annual Documentary Lab. She also received grants from NU-Q through student-run organization Studio 20Q and the university’s Media Innovations Lab (MIL).

Meanwhile, recent NU-Q graduate Nouf Al Sulaiti was awarded Best Short Film in the Mohaq category for her film ‘Gubgub’, about a young girl who is discouraged when her father values her brother’s accomplishments over hers and sets out to win his approval.