Share
When Fouad Hassan, NU-Q’s student speaker at its graduation ceremony told people he was attending Northwestern University to study film and theater he said that “jaws would drop eyes would roll, and an unnecessary pointed cough would follow to cover the confusion.” Hassan said the confusion was understandable since he is blind. His response four years ago, he told those gathered for the ceremony, is the same he gives today, “This is what I love, and this is what I will do.” 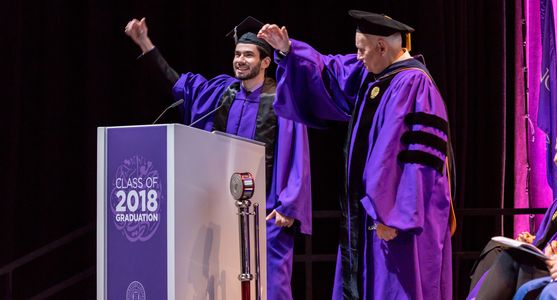 Hassan was one of 61 students of NU-Q’s seventh graduation class. In his remarks, he reminded them of all that they had accomplished in their four years at Northwestern. This brings the total to 282 graduates since the first ceremony in 2012.

“Our time at Northwestern pushed us to achieve higher goals and summon the courage to pursue tougher journeys. As media students, Northwestern has also taught us to pursue and tell the untold stories, to connect and empathize with one another, and more importantly, to fight for what we know is right,” Hassan said.

Renowned filmmaker and journalist Sharmeen Obaid-Chinoy, the graduation speaker, explained how the power of storytelling contributes to the commanding role of communication in a global society. Recounting the outcome of her first-ever investigative story on extreme bullying Pakistan, Obaid-Chinoy told the students what her father told her, “If you speak the truth, I will stand with you, and so will the world,” she said. 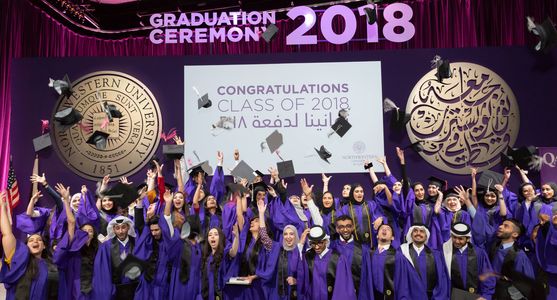 After detailing a series of additional lessons, the two-time Oscar winner summarized her advice to the class by saying that their journey of life is now beginning and they should “remember that stubborn dreams are worth pursuing; remember to stand up for yourself, to be relentless, to fight back, to have thick skin, to embrace failure, to apologize when you make mistakes, and to break bread with strangers.”

Northwestern President Morton Schapiro, who has attended every NU-Q graduation, told graduates and their families how much NU-Q students have inspired him over the years. “You not only carry the Northwestern purple flag so proudly, you absolutely exemplify the best of what we can achieve,” he said, “you are an inspiring example for the university itself, and as you join more than 250,000 alumni worldwide and I am confident you will make your mark in the world too.”