Share
The founder and chairman emeritus of MIT’s Media Lab, Nicholas Negroponte, an inventor, thinker, and angel investor who has pushed the boundaries of connectivity and communication, shared his thoughts on the evolving world of digital information with students, faculty, and staff at Northwestern University in Qatar (NU-Q). 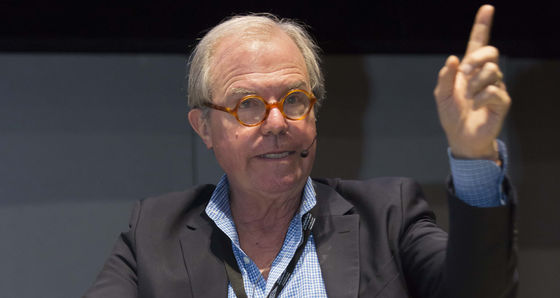 “Professor Negroponte is a pioneer in the world of interactivity and multimedia, and he has been a driving force behind much of the innovation and developments that have shaped our world today,” said Everette E. Dennis, dean and CEO. “For many years he has led and supported an enormous array of projects that brought new discoveries to the digital world.”

The Media Lab, which helped drive the multimedia revolution, was established in 1984 by Negroponte as a center for research and innovation, and the intersection of art, science, and technology. Since then, the lab has developed hundreds of original ideas and produced research on new technology including touch-screen sensitivity and flat panels long before they were introduced to the market.

“The thing I am most proud of is not the hundreds of projects that we create every year, but merely the existence of the Media Lab, which continues to serve as a hub for innovation and creativity,” said Negroponte.

Negroponte, known for his philanthropic work, founded the One Laptop Per Child organization, which designs, develops, and distributes low-cost laptops for children around the world with a mission to empower them through education. “The one thing I realized throughout the years is that the telecommunications industry does not work in the interest of people,” said Negroponte, “yet, we are reaching a time when I believe connectivity should be a human right.”

A combination of serendipity and years of hard work gave Negroponte a chance to pitch this concept to the Pope, who became an avid supporter and partner. With the Pope’s support, the United Nations Security Council may be voting to change the international rights regarding access to Internet connectivity in the coming year. “My hope, and this is truly a hope, is that there is a 50 percent chance the UN might declare connectivity as a human right in a resolution, which will be interesting because human rights are free and all you have to do to qualify is be human, and that really does change the landscape," said Negroponte.

Throughout the conversation, which was moderated by Dennis, Negroponte discussed his hits and misses on predictions he made about the world of technology.