Share
The Arabic Book Club at Georgetown University in Qatar recently resumed its meetings with a preliminary discussion of the intellectual project of Moroccan thinker Taha Abdul Rahman. Participants in the event included professors and students from Education City, Qatar University, Al Jazeera Network, and Doha Institute for Graduate Studies. 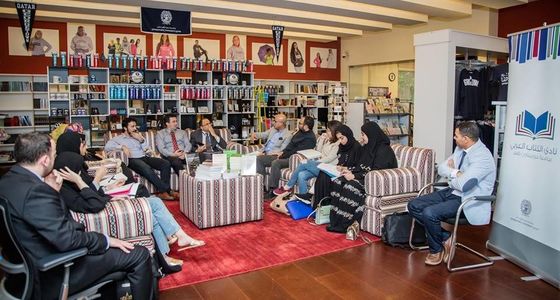 The meeting was dedicated to introducing the Moroccan author and preparing to read and discuss various parts of his intellectual project. The club's members are looking forward to the next session in May to discuss his book titled The Question of Morality, while the June session would be dedicated to reading his book The Spirit of Religion. That will be the last session of this academic year, with the club hoping to start in September with a series of various readings.

The Arabic Book Club has witnessed an exciting season over the past year. In previous meetings, members discussed The History of Recording History in the presence of its author Wagih Kawtharani, The Impossible State by Wael Halaq, You Won’t Speak My Language by Abdul Fattah Kilito, and A Brief History of Arab Thought by Hussein Moanis, as well as a summary of a lecture by Heba Rauf Izzat on “the transformations of politics and the concepts of power in the post-national state era”.

The Arabic Book Club was founded by GU-Q professor Yehia Abdel Mabdi Mohamed, in Fall 2016. It is a part of the cultural, academic, and professional activities offered by the Arabic Language Program, which was established in 2007 to teach Arabic as well as Arabic literature and culture to GU-Q students.

Audio recordings of the book club sessions can be found on the iTunes Podcast app and on the Sound Cloud website: https://soundcloud.com/georgetownuniversityinqatar.