Share
As voting closed on one of the most controversial presidential elections in the history of the United States, Georgetown University in Qatar (GU-Q) students, faculty, staff and guests gathered to watch the proceedings from afar. At dawn, they were joined by the United States Ambassador to Qatar to witness the final moments of the campaign. 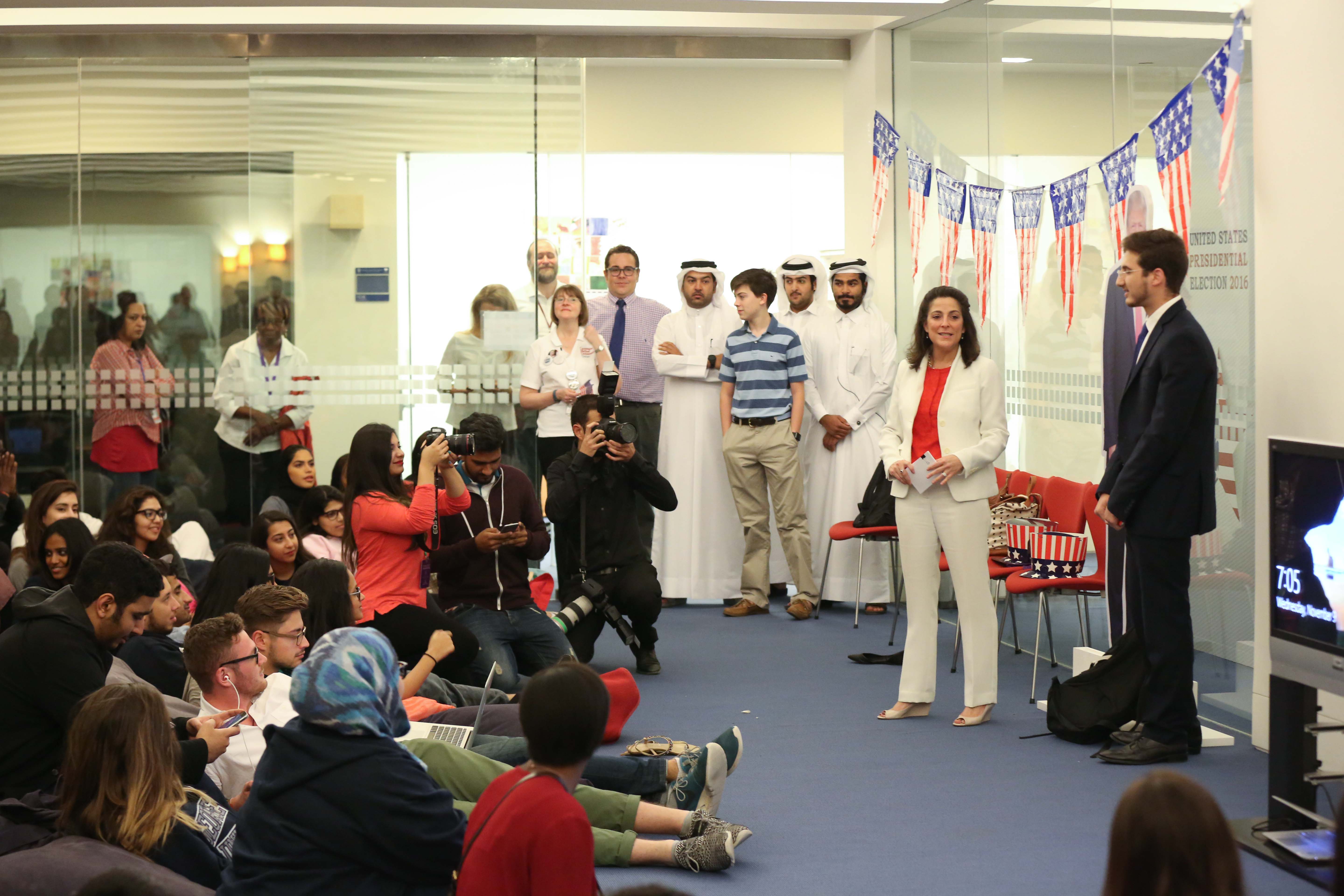 The event, which started at midnight and ran until mid-morning on November 9, brought together members of the extended Georgetown community to watch live coverage and political-themed movies, cast their ballot in a mock voting booth, and predict the outcome of the presidential race. As a prequel to the viewing event, Professor Clyde Wilcox lined up an expert group of political actors from the United States, who joined for four hours via Skype to discuss race, gender, identity, and party affiliations that factored into the elections.

“When a hundred students come out in the middle of the night to watch a political process in detail, it is clear that they have been energized by their studies, they have an incredible community spirit,” said Ambassador of the United States to Qatar, Dana Shell Smith. “I have had some of the smartest questions from these students that I have gotten anywhere. I have talked to students from Egypt, from Syria, from Scotland. They are from everywhere, and they are all brilliant, energetic, and amazing students.”

The election night gathering is a way for the GU-Q community to feel part of the political changes that will affect global international relations for the next four years, as well as witness the workings of a modern democratic process. As GU-Q Dean James Reardon-Anderson explained, “there are three things that matter for any democracy: to have rules to follow, to respect the outcome, and that whoever wins has to protect the interests of the minorities. This is how you have a successful democracy you can live with".

The students’ turnout at the event exceeded expectation.“The number of students this time is higher than past elections, and they are more enthusiastic and excited. Some of the die-hard students have been here all night. Their gathering is a testament of the spirit of Georgetown that brought students from other universities here to share the moments,” said Director of GU-Q’s Center for International and Regional Studies, Dr. Mehran Kamrava. “This is also an opportunity for our students to familiarize themselves with the practicalities of the election process that they have been studying about academically".

As the morning wore on and votes for presidential candidates Hillary Clinton and Donald Trump were tallied, the event participants were joined by more staff and faculty members to watch as the election results were called state by state.
“This election season has been very exciting for our students, both inside and outside the classroom,” said Assistant Dean for Academic Affairs, Dr. Christine Schiwietz. “Our play-by-play election night festivities mark the big finale to the many dynamic conversations and expert forums focusing on the race to the presidency".

The election night event is held at GU-Q every four years, to allow students and the wider community in Qatar to engage with the presidential race from a distance.