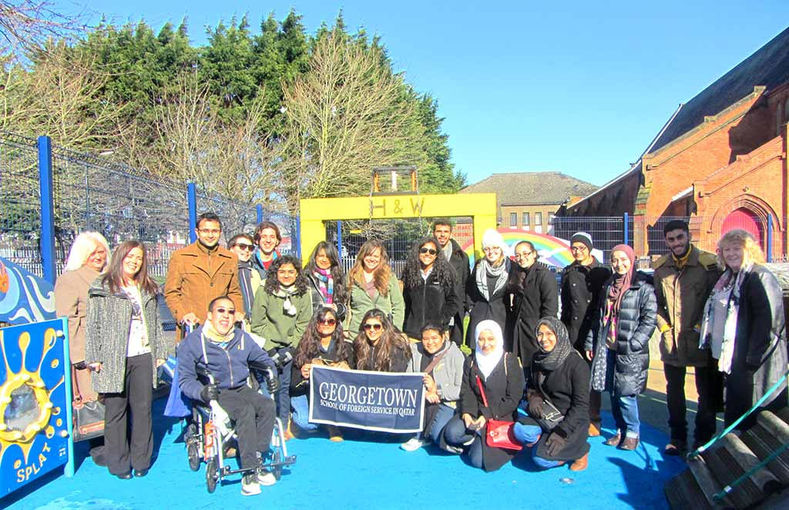 In order to examine attempts at peace and healing from what many still refer to as ‘The Troubles,’ 18 Georgetown University – School of Foreign Service in Qatar (SFS-Qatar) students recently traveled to Belfast.

While there they observed the successes, and studied the frustrations, of the political reconciliation efforts in Northern Ireland.

The trip to Belfast was an SFS-Qatar Zones of Conflict, Zones of Peace (ZCZP) learning trip that tasked students with assessing how various groups have used sports, art, and culture as tools of understanding and compromise.

Sixteen years ago the Good Friday Agreement introduced an arrangement in which exclusively democratic and peaceful means would be used to resolve political issues. This study trip gave the Georgetown students an opportunity to view firsthand which issues remain, to this day, unresolved and to better understand efforts made by community stakeholders to address those concerns.

During the eight-day trip, students met with several NGOs, including The Northern Ireland Children's Enterprise, Healing Through Remembering, and PeacePlayers International. They also met with historians, professors, curators, artists, playwrights, and community organizers in order to better understand the current regional dynamics.

“While the peace process in Northern Ireland is seen as a success by some, there are still a large number of issues that remain unresolved in their society, which is still largely divided,” said Sheena Martinez, SFS-Qatar Student Support Administrator.

“Traveling to Northern Ireland allowed the students to learn about the issues that still remain as well as gain a better understanding of the efforts of the government, community leaders, and local organizations to build bridges across the divide.”

The ZCZP program has been repeating trips over recent years as a way of maintaining and building relationships that were established in previously visited countries. This allows a first-hand view of changes that have occurred over the years.

In 2014, ZCZP participants are visiting the same countries that ZCZP students traveled to in 2011.