Extraction Of An Eco-Friendly Insect Repellent From Basil 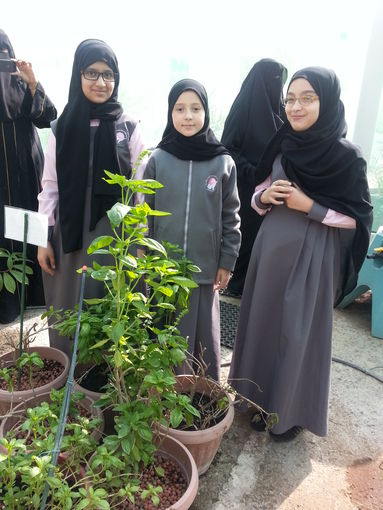 The students also participated in the Sixth National Fair for Student Research 2014 which was organized by the Research Unit of the Supreme Education Council.

The school’s management reiterated its commitment towards the principle of social partnerships and cooperation with the relevant institutions in the state, including the Qur'anic Botanic Garden.

Al Khansaa School students participated in research on the ‘Extraction of an Eco-friendly Insect Repellent from Basil’. Basil is one of the medicinal plants which is mentioned in the Holy Qur'an and the Sunnah.

The students participated in the research with the assistance and guidance of research supervisor Mrs Bilquis Al-Kadhy, and Mrs Ne'ma Mohammed Zayton, the school’s scientific research coordinator.

The students worked diligently on their research on the impact of basil on insects and how it contributes to reducing pollution from pesticides. They looked at how to develop natural alternatives which could be derived from the surrounding environment.

Research team conducted a survey in Qatar on the benefits of basil and its effects as an insect repellent. They also reviewed research on plants and their role as insect repellents in order to enhance current research. The research team worked with Qatar Science Club to provide basil oil extracted from its leaves and seeds in order to provide another sample for the study.

The supervisors and students made several field trips to the Prevention of Radiation and Chemicals Department at the Ministry of Environment to explain the methods of extracting active substances from basil.

The students were offered the chance to extract the substances from the basil leaves.The extract was mixed with ethyl alcohol, which is a relatively simple operation. The samples were then distributed to a number of people for home testing. Recommendations were made at the end of the research phases and were submitted to the competent authorities in order for them to examine the findings of the research.

Basil can be found throughout the country and can easily be planted and cultivated. The research suggested that most people are unaware of the benefits of basil, especially its insect repellent properties.

The active substance in basil (volatile oil), apart from its use as an insect repellent, is also a natural and economic product. Individuals provided with samples for use at home confirmed that the extracts helped to repel insects.

Ms. Fatima Saleh Al-Khulaifi, Project Manager of Qur'anic Botanic Gardens was impressed by the research efforts of the primary school students and she expressed a keen interest in supporting the research project.