Share
The tremors of the growing era of ‘fake news’ felt across the globe were the focus of a special conversation at Northwestern University in Qatar (NU-Q) with internationally syndicated columnist and host of CNN’s GPS program, Fareed Zakaria. 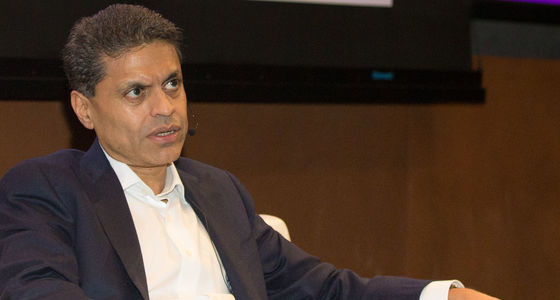 Coinciding with his visit to Qatar as a keynote speaker for the annual WISE conference, Zakaria took part in a public interview before more than 100 students, faculty and staff on Tuesday.He discussed implications of a post-fact world, fake news, and the role of social media in shaping opinions and influencing news consumption among other topics in a session conducted by NU-Q Dean and CEO Everette E. Dennis.

In a discusson that ranged from media coverage of foreign policy and domestic politics to the role writing and liberal arts education, the CNN commentator warned that globalization and digitization mandates new approaches, even radical ones for higher education.

During the session, Dennis asked Zakaria about the process of deciding what news to cover and how he is able to create content that appeals to a global audience. “We should choose a story,” Zakaria explained, “where we have something interesting or important to say, there needs to be an added value to everything you say, everyone you interview, and each topic you choose. It works best when there is a passion to what you are doing.”He added that post-hoc reviews of his weekly program are a essential element in its improvement.“We need to ask ourselves the tough questions if we are to make advancements,” he said, in arguing for more intellectual discipline for journalists.

Also discussed was distinguishing between real and fake news and how the media are dealing with new challenges of attacks on their coverage and accusations of ‘fake news’ whenever the current U.S. administration disagrees with the content.

“The term ‘fake news’ was created to describe news that was intentionally created as false – to poison people’s understanding of a subject, to prejudice them in terms of voting, etc…” said Zakaria. “However, when President Trump refers to news he doesn’t like as ‘fake,’ it conflates the issue of falsehood, opinion, interpretation, etc., and that’s very damaging because it’s very hard to come back from. In the end, I have an enlightenment belief that truth will win.”