Building A Scientific And Engineering Base In Qatar 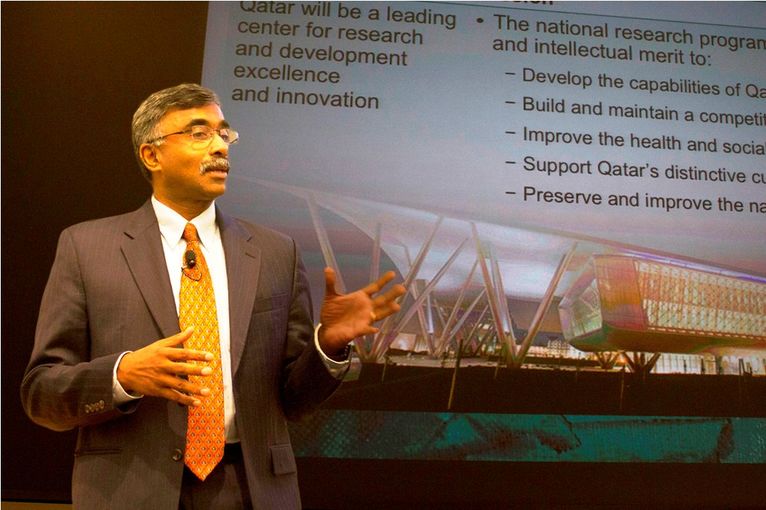 After working at Oak Ridge National Laboratory (ORNL) for nearly his entire career, Thomas Zacharia decided in 2012 that it was time for a change.

The former ORNL deputy director for science and technology in Tennessee, Zacharia assumed the reins of a new job in August 2012 as the executive vice-president for R&D at Qatar Foundation in the heart of the Middle East.

In a Director's Distinguished Lecturers Series talk at Lawrence Livermore, Zacharia recounted his experiences of the past year and discussed the opportunities and challenges of trying to build a scientific/engineering base in Qatar.

"I describe my job as an engineer in a moving locomotive hanging outside the cab while laying the tracks in front of it and the train is picking up speed," Zacharia joked.

Qatar is about the combined size of Connecticut and Rhode Island and is located east of Saudi Arabia, jutting into the Arabian Gulf. A former pearl-fishing center, it is one of the world's richest nations.

Ruled by the Al Thani family since the mid-19th century, Qatar exports one-third of the world's natural gas and by law allocates 2.8 percent of its gross domestic product to scientific research.

The scientific research money is shepherded by Qatar Foundation for Education, Science and Community Development, the Foundation's full name.

"One way to think of it is as a big Laboratory Directed Research & Development (LDRD) program, where you have a lot of flexibility in terms of how you spend the money to achieve the objectives of the Qatar National Research Strategy," Zacharia said.

In making the decision to move to Qatar, one of the most important factors for Zacharia was whether the nation had a track record of achieving tasks that appeared to be impossible, such as establishing Al Jazeera, Qatar Airways and the national oil and gas companies.

"These are examples of where they have gone out and surprised the world."

Probably the most important challenge for Qatari researchers and the nation will take place in 2022 when the tiny country jumps onto the international stage by hosting the Federation Internationale de Football Association (FIFA) World Cup.


"Basically, the challenge is to create cooler microclimates in and around the stadiums," Zacharia told Lab employees.


"But one of the challenges that the World Cup 2022 sponsors have asked Qatar Foundation is to develop cooling technologies that have a sustainable application because, after all, the desert is still going to be hot. For it to be deployed, the solution has to be found within the next five to six years," Zacharia said.

Qatar plans to spend about $140 billion in infrastructure improvements and it will construct 16 stadiums, only two of which will be permanent. The other 14 venues will be dismantled and donated to other nations.

With about 11,500 square kilometers (or about 4,500 square miles), Qatar is a small nation that has about 1.8 million people, including 300,000 citizens and some 1.5 million expatriates from around the world.

But, according to Zacharia, the country's small size belies its "huge impact in terms of the global economy."

About 20 percent of the United Kingdom's energy supplies flow from Qatar, while the similar numbers are 11 percent for India, nine percent for Japan and three percent for China.

"Qataris are trying to see whether they can emulate what Norway has done or Singapore has done and create a diversified economy," Zacharia said. "It is harder to do when there is such a strong reliance on a hydrocarbon economy. And so it really requires a proactive, enlightened push from the leadership to provide the motivation as described in Qatar National Vision 2030."

Beyond serving as Qatar Foundation's executive vice-president, Zacharia also wears another important hat as the Chairman of Qatar Science & Technology Park, which is located in the nation's capital of Doha.

An effort to construct a national laboratory or university-type research environment, the campus features six US universities - Carnegie Mellon, Georgetown, Northwestern, Texas A&M, Virginia Commonwealth and Weill Cornell Medical College – which have already located branches there and are graduating students.

Qatar Foundation is seeking to establish partnerships with universities and other research facilities toward jointly hiring scientists and engineers, and starting collaborative projects.

During his talk, Zacharia gave an update on former Lawrence Livermore National Laboratory (LLNL) employee Erik Stenehjem, who headed the Lab's Industrial Partnerships Office from 2008 to 2012 and is now the Foundation's Executive Director of IP & Technology Transfer.

"He's also having a lot of fun getting chased by the guards because he jet-skis too close to protected compounds," Zacharia said, with a hearty laugh.

"He's developing the commercialization policies and procedures for Qatar Foundation, but those policies also will be the basis for the country. The Foundation gives great band-width and influence for a small country."

Recently, Qatar Foundation hired Franco Marincola, a former National Institutes of Health researcher to be its head of medical research at Sidra, a women's and children's hospital. The scientist has 400 publications to his credit and is the second most cited researcher for melanoma.

"These are the kind of quality people that we are able to attract," he said.

Among the major scientific research areas of which the Foundation intends to direct its focus are water security, energy security, cyber security and food security, Zacharia said.

To read the full version of this article, please go to the: Lawrence Livermore National Laboratory website.